(— The audience in the picture shows the mixed Chinese-Tibetan Buddhism under the Manchu-emperors in today’s Inner Mongolia and Beijing (Fobidden City): yellow ceremonial coat (Chinese) under yellow monks’ cloak (gelug Tibetan). Another example of this vestimentary practice is shown in a print of 1892. This last mentioned print may not remain very long on the internet. —) 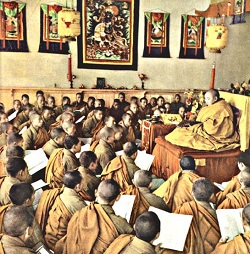 After the Robert H.N. Ho Family Foundation made a donation staff of the Royal Ontario Museum and Beijing’s Palace Museum were able to mount an exhibition on the arts and crafts of the period in which the Manchu-dynasty ruled from the Forbidden City in Beijing. The Canadese newspaper Globe and Mail of October 16, 2014 reported on it and cited Ms Kathleen Bartels who announced a new Institute of Asian Art to be added to the Vancouver Art Gallery.

Especially the Netherlands is well aquainted with the earthenware of the Qing (= Manchu) Dynasty during which Emperors Kangxi, Yongzheng and Qianlong ruled between 1662 and 1796 — as the saying in Holland goes, one could fill a canal with all the Chinaware that came to the country. To this day Holland still has a fair amount of Chine de commande and Chine tout court.

As far as Buddhism goes, to understand what was going on in the “lamaïst” temple on the premises of the Forbidden City we have to turn our attention to the 6th and 7th Dalai Lama, to the pictures made during these years, to the lineage of the Shamarpas and to that of the Nyingmapas of Tibet.

The world in which the two mentioned Dalai Lamas lived appear to have been especially politically complex and militarily violent. “Treasures of Life”, see the biography of the 6th Dalai Lama on http://www.treasuryoflives.org/biographies/view/Sixth-Dalai-Lama-Tsangyang-Gyatso/5871 and that of the 7th (http://www.treasuryoflives.org/biographies/view/Seventh-Dalai-Lama,-Kelzang-Gyatso/TBRC_P179) give us an insight into the lesser known tantric practices of the Gelugpa or yellow hat tradition during these years. This, as the iconography shows that was made in these years was the Buddhist practice of the Forbidden City during the reign of the three mentioned emperors, and during that of their successor Guangxu.

To stress this observation we might look at the kagyu lineage of the Shamarpa which was outlawed in 1792 when Qianlong was emperor. A new Shamarpa only was designated in 1892, the year when W. Woodville Rockhill journeyed to Lhasa. These were the years of Emperor Guangxu (1875–1908), equally a Manchu, equally a Qing emperor, but, unlike his forebears, sidelined by the then Empress dowager who most probably loosened the reins a little bit on the non-Gelug Buddhist schools of Tibet (including todays Bhutan).

The same should probably be said of the Old School, the Nyingma. Paul Kocot Nietupski in his “Labrang Monastery” writes on page 32 how in the 18th century “the Jamyang Zhepas worked to bridge rather than widen the gap between the Gelukpa, Nyingma and other Buddhist and non-Buddhist groups.” Had all been well between the Manchu, the Kagyu and the Nyingmapa on the one hand, and the three main Schools of Buddhism on the other the Jamyang Zhepas would not have engaged in peace negotiations.

To end with the theme ‘Words in picture’, Emperor Qianlong ordered the Tibetan Dragon Sutra to be compiled. It is bound in 108 volumes — 108 being an auspicious number. The Dragon Sutra is now kept in the National Palace Museum in Taiwan and is said to contain all “teachings” and “laws” by Sakyamuni Buddha himself. It is written in Tibetan and Manchu script. As it is kept in a museum there can hardly be anyone today with enough time, opportunity ánd permission to study or copy it. Here the expression “dead words” come to mind.